In the early days of the pandemic, Professor Adam Finn assembled a team of some of the best and most relevant scientists that Bristol had to offer, to conduct urgent research into SARS-CoV-2. The Bristol UNCOVER Group was formed, incorporating clinicians, virologists, immunologists, synthetic biochemists, and many more. As part of this group, one of the key roles for Professor Berger and his team was to synthesise major antigens, primarily the SARS-CoV-2 Spike protein.

You’ve probably come across the term Spike protein regarding the coronavirus because it’s one of the reasons the virus is so infectious. “It decorates the surface of SARS-CoV-2,” says Professor Berger, “and it is the vehicle with which the virus attaches to our body’s cells. The virus then enters the cells, starts replicating and mayhem starts if you’re unlucky.”

Christiane Berger-Schaffitzel, a fellow member of the UNCOVER group, used cryogenic electron microscopy (cryo-EM), a cutting edge imaging technique, to see the structure of the Spike proteins that Imre’s team had made. She discovered that the Spike they had produced was different. By this point, Professor Berger’s team were familiar with forms of the Spike protein that other researchers were investigating – a form that was open and had sticky patches allowing it to attach to a cell. “But ours wasn’t open, it was closed. And it wasn’t just closed, it was locked,” exclaimed Professor Berger. “Those sticky patches were hidden, meaning the Spike protein could no longer attach to the cell, stopping the virus in its tracks.”

The Cryo-EM facility, at the University of Bristol, where the team uncovered the Spike protein’s structure.
This was something that had never been encountered before in the study of coronaviruses. They employed Cryo-EM once again to peer even deeper into the structure, to answer a game-changing question: why had this happened?

“What Christiane found was a very well defined feature of the Spike protein, that was perfect for attaching a drug to. Inside this pocket, we found a molecule which was like a key, locking the Spike down.” This miracle molecule was linoleic acid and it was discovered completely fortuitously. “It took us a while to figure out,” continued Professor Berger, “but when we did, we published our results in Science Magazine in November 2020.” This discovery launched Halo Therapeutics Ltd.

Effective Regardless of Variant

This tiny, naturally occurring free fatty acid has a powerful ability. “It showed us how we can lock the Spike protein down, thereby stopping infectivity of the coronavirus in its tracks,” said Professor Berger.

This discovery is meaningful because free fatty acids are already manufactured at huge scale for the nutritional industry and have a decades-long track record of use in the pharma industry as inactive ingredients, with an iron-clad safety record. Moreover, the free fatty acid binding pocket in the coronavirus Spike protein has been found in each of the 5 concerning variants of Covid-19 that have been identified so far – including the Omicron variant. The Halo team have thereby made a treatment that should be effective no matter what variant of Covid emerges.

Halo Therapeutics was formed in December of 2020, spinning out from The University of Bristol to take this discovery out of the lab and into the hands of clinicians, bringing a pan-coronavirus antiviral to the people. Halo Therapeutics is planning to apply their antiviral in clinical testing as a COVID prophylactic in care homes. 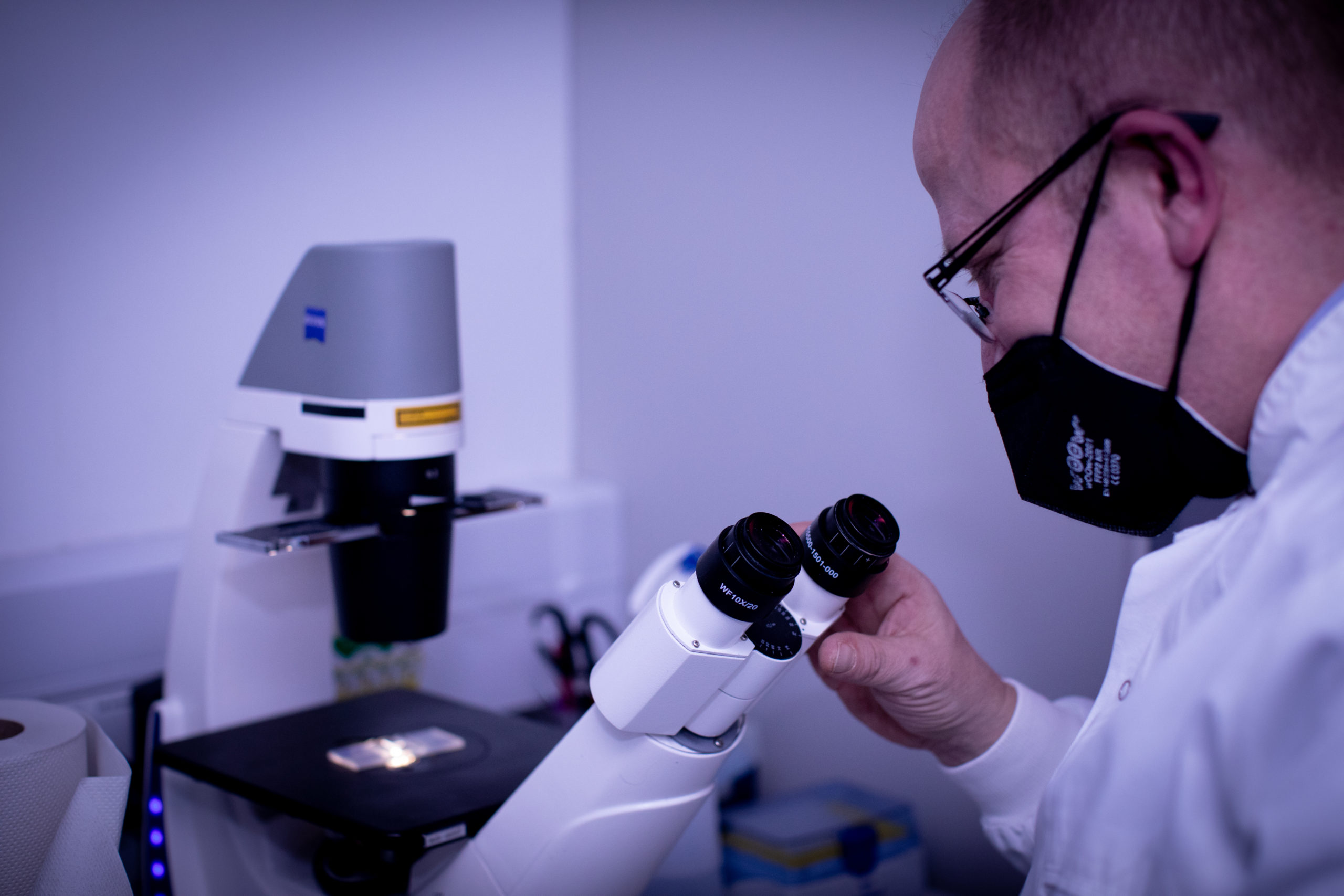 What is an Antiviral?

When you become infected with a virus, you can take an antiviral and it will ideally kill it. Halo Therapeutics have designed their Covid-19 antiviral so that from the moment you spray it into your nose, it should stop the coronavirus multiplying, halting it in its tracks before it can reach your respiratory tract and lungs.

As free fatty acids have an established safety record and are natural components of the body, this antiviral could be used as a prophylactic too – a preventative treatment you can take ahead of time if you know you’re going to be in a situation of increased risk of exposure to Covid-19 infection. You could also use it in conjunction with being vaccinated, to significantly enhance your protection against infection with the virus.

Currently, there is no at-home therapeutic treatment for Covid-19 patients. “It is our hope,” states Imre, “that the Halo antiviral can be used as an early intervention very soon.” This is important because, as we’ve seen, the virus has an interest of its own – Darwinian survival. It has been constantly evolving, producing variants that are even more infectious and transmissible, like the Omicron variant we have now. It’s a race against the clock to stop SARS-CoV-2 from being able to evade the currently available vaccines. The ability to kill it quicker with a treatment like Halo’s, and reduce transmission, gives the virus less time to mutate and fewer human bodies to evolve in.

A Specific and Targeted Treatment

Halo’s technology is unique compared to the other options out there for Covid-19, because it exploits the pocket feature discovered in the Spike protein, which is present in all pathogenic coronaviruses. “It’s filling a gap that other technologies don’t address, it’s not competing with them. That’s the key difference,” confirms Professor Finn.

Harnessing their fatty acid formulation’s abilities sets Halo’s treatment apart. “The molecule is very well tolerated by the body (as demonstrated in clinical trials using it in different contexts), safe, naturally derived and very powerful as an antiviral,” explained Professor Berger. This makes manufacturing and scaling up this therapeutic treatment easier than the complex drugs and vaccines we have already produced en masse.

Halo’s antiviral has been designed to be administered via nasal spray – a widely adopted method of treatment, like the hayfever or congestion sprays you may have come across if you’re an allergy sufferer. Thus, it can easily be used at home, by yourself. And, even better, it means the drug is targeted exactly where you need it – in the case of Covid-19, your upper airways. Visualising the effect that Halo’s antiviral drug has on the coronavirus Spike protein. The fatty acid can be seen as small orange spheres in the closed form of the spike.

What impact could an effective antiviral have?

As an expert in viral transmission and a key Covid response opinion leader, Professor Adam Finn was the perfect person to pose this question to.

“What we’ve realised over the course of this pandemic, is that you need multiple strategies,” he began. “There are options that are highly effective, like vaccines, but they take time to develop, implement and take effect across the whole population. On the other hand, we have options that are available and effective right now, like lateral flow tests. Doing a test is fine, but if it tells you that you’re infected, there’s nothing you can do immediately to get rid of the virus, you can only modify your behaviour to prevent its transmission any further.”

“This antiviral nasal spray from Halo Therapeutics addresses a gap in the two available strategies that we have (vaccines and tests). A treatment that you could use in response to an infection or outbreak situation, which could be implemented immediately, was widely available and cheap to obtain, would produce an immediate impact. It could be a mass intervention. Right now, with the Omicron variant, this is what we need. We would have an immediate solution whilst we prepared other, long term strategies.”

“This kind of approach could be universally applied, but still using them in a targeted way after diagnosis. The technology can be readily translated into an affordable strategy by governments and made available widely, not just in wealthy settings, but right across the world. I also think take-up is likely to be enthusiastic, given everyone’s experience of these repeated waves and their societal effects.” Professor Imre Berger talks us through the structure of the free fatty acid binding site in the Omicron variant and what it could mean for responses to new variants of the coronavirus.

What’s next for Halo Therapeutics?

“We’ve successfully developed a stable formulation, established manufacturing pipelines and designed the spray delivery apparatus in the past nine months,” said Professor Berger. “Normally this process would take 2-3 years, but we’ve managed to do it at spectacular speed.”

“We have turned it around so quickly because the agents we chose to combine and test are already well established in pharmaceuticals and have been through clinical trials in other contexts – so we knew they would be safe. Now we’ve combined them into a cocktail that’s tailormade for coronaviruses and uses our active ingredient. It’s ready and we’re now fundraising to take it into clinical trials.”

“We are now in a position to demonstrate this antiviral’s effectiveness,” mirrored Professor Finn, who will be designing the clinical trials for Halo Therapeutics. “Authorities around the world are now more receptive to the idea that if you’re going to act on a viral wave like Omicron, you can’t hang around. We have to get ahead of the curve and implement strategies quickly.”

“Provided we have the correct safety data, and obtain data from trials showing that we can suppress coronavirus transmission with this treatment, and reduce the severity of infections, it could be a very short time before this could be made widely available.”

“It doesn’t require an enormous amount of money, just enough to get the process moving forward. It needs to happen quickly if this is going to be useful and we’re striving to get there as soon as possible.”